Want To See Something Wild? Check Out Maryland's Football Uni's 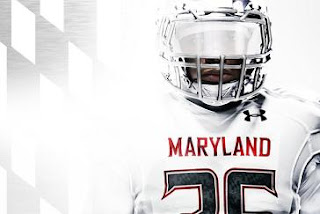 There is nothing more iconic to a football team than it's uniforms and colors. A good uniform helps a team be instantly recognizable, and is something fans can be proud to wear on jerseys come game day. Ironically, this means that a football team's uniform must both keep up with trends, and stay true to its past so as to not alienate fans. Nowhere is this more apparent than with the Maryland Terrapins.

The Maryland Terrapins uniforms have had a bit of an interesting history up until recent years, in no small part due to the Maryland flag having two quite contrasting color patterns to it; black and gold, and red and white. Depending on who was couching the team at the time, the uniforms tended to switch between the two relatively often, a rare thing to see in a football team where designs are usually more fluid and colors more fixed. Before just recently, the established trend had been that they wore red and white normally, but worse black for special events. This has lead to those who bought Maryland Terrapins football tickets to be one of the first schools to utilize the 'blackout concept', where all the fans wore the same color to stand out.

Recently however there has been a huge upset, not just to the Maryland Terrapins but to the football world in general. Not only did the team introduce a new form of lighter uniforms, they also completely embraced their flags contrast rather than tip toeing around it. The result is that the uniforms are now uniquely asymmetric, with the gold and black on one half of the uniform and the red and white adorning the other half. There are also some patterning differences between the sides, but those are not as eye catching. And eye catching they are, with the entire media buzzing about the uniforms. Well over half of football twitter was talking about the Maryland Terrapins new look.

The new uniforms are controversial to say the least. The unique look has earned a lot of backlash from those used to more symmetrical and color flat uniforms from their athletes. Many have accused the uniforms of being an eyesore, or too much like something in a video game. However, a lot of these complaints are based in the human dislike of change. Those in support of the uniforms have claimed that they stand out, have gotten a lot of attention, and make the team look more like 'super heroes', none of which is a bad thing. They are the heroes of the field, they deserve to look like it.
So once the initial backlash dies down, will the Maryland Terrapins be setting the new trend in football uniforms? It certainly looks as though some might well follow their example as all eyes are on the Terrapins new look, and a lot of the buzz is positive. It just goes to show that fashion can have a great impact even on the football field.

April 29, 2017
What would you say to a person to persuade him or  her to do anything you want? A well-structured utterance will be more efficient from a psychological point of view. Such written utterances may be called hooks. The role of a hook sentence is closely connected with the essence of the word’s original meani ng. Its notion is a metal, curved tool for catching fish. That  is  it! The main function of a grabbing sentence is  to catch somebody’s attention. Do not hesitate to use Spider Essay Writing Service  if you need to write your academic writing. Writing an industrial revolution essay, it may seem a little bit challenging to compose a coherent and releva nt statement that will attract people at the first sight. However, we can provide you with several pieces of advice on how to create a trap sentence even for a difficult topic such as the industrial revolution.  What Should You Do to Get an Eye-Catching Se ntence?  We single out several useful methods and tricks to make your
7 comments
Read more