A Night Out In San Francisco

June 18, 2015
When thinking about San Francisco, certain attractions come to mind. The Golden Gate Bridge, Fisherman's Wharf, and the infamous cable cars are a few iconic sites that come to mind. But what about San Francisco after the sun goes down. Did you know that the city comes to life with adventures, sights, and sounds not available during the day?

Here are four things that are a must-do after the sun melts into the bay. 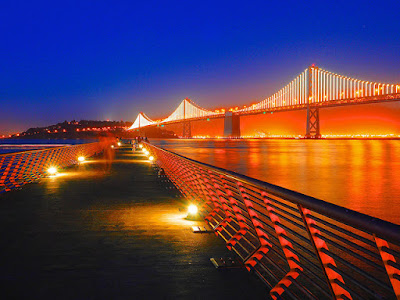 Beer and wine are included in this city of lights tour which means no one under 21-years-old may participate. Taking the Vantigo's tour on a clear night allows you to experience the infamous views of the Bay City while also enjoying the moon and stars above. The tour moves through Union Square, Chinatown, Fisherman's Wharf, the Marina and, fog permitting, the Twin Peaks, to name a few. During the two-and-a-half hour tour, you'll learn about the history of San Francisco, culture through the years, and how earthquakes affect the city, all while enjoying complimentary beer and wine.

The night tour is the most thorough tour of the prison and the Bay surrounding it.  A narrated boat tour begins the evening as it trolls around the rocky island before docking at the front gate. From there you can enter the prison and begin the tour of your choice. One of the most popular is "Doing Time: The Alcatraz Cellhouse Tour", which is offered only at night. Not only can you experience what it was like to be a prisoner on this isolated island, but it is also a fabulous place to capture breathtaking sunsets through the lens of a camera.

The Nob Hill Pub Crawl is not to be missed as a night-time activity. Beginning in Union Square, you will visit three legendary San Francisco Bars and one VIP nightclub. The crawls bring people together from all over the world and often sell out, so book early. With your ticket, you will receive a party host, drink and shot specials and best of all you will never have to wait in line. They even through in a $10 LYFT ticket so you can ride home safely after partying your night away.

4. Ghost Hunting in the Bay City

Choose one of the many Ghost Hunting expeditions for a tour that will leave you looking over your shoulder. The San Francisco Ghost Hunt meets in front of the Queen Anne Hotel for a three-hour adventure of ghost stories and possible ghostly encounters. This is the original supernatural walking tour. Reservations are not required, and prices are reasonable for a family fun adventure. However, it is not recommended kids under eight take this tour.

When taking advantage of the San Francisco nightlife, stay near the cable car line for easy access to the whole city. There are many fantastic budget friendly hotels in the area. If you stay near Union Center you will definitely be close to all the action and finding a way back to your hotel will be easy.