The Story Of My Injury

July 03, 2016
EIGHT MONTHS HAVE PASSED SINCE I FELL AND FRACTURED MY RIGHT ANKLE.  I can still remember very clearly what happened on the night that I slipped and fell after a dinner.  It was very dark and I could not see a small curb while I was coming down the steps.  Within moments, my right ankle began to swell and I could even stand up properly.  I knew I had to be admitted to the hospital straightaway.  After some X-rays, I was told that I needed surgery the next day.  It was a lateral malleolus fracture that needed surgery to join it back so that the bone can be healed fast.

I was in a dilemma that moment, should I go for the op or should I not?  The reason for my hesitation was that my Europe trip was just two days away from the night I fell.  Everything for the trip has been arranged, flight and train tickets, lodging for the 21 days have all been paid for.  No refunds since it was just two days before departure.  Oh boy! 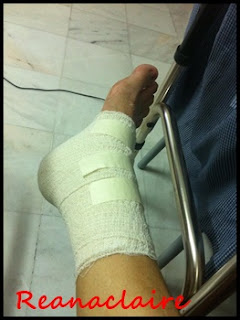 That very next morning I told the doctor of my dilemma and he gave me two options.  Do the operation and be healed fast within a month or it would take six months or so to heal if my leg was just wrapped up in a cast.  I opted for the latter, I told him that I would be flying thousands of miles away the very next day I was discharged.  The doctor gave me a wide grin and I could still remember what he said while he was wrapping my leg in a cast.  "I am going to do a nice job (wrapping up my leg), so that you will be comfortable even when you have to land on your leg."  Yes, he gave me two black soft rubber at the bottom of the cast so that I can put my leg down comfortably if I needed to.  LOL...

The twelve hours flight was comfortable, everything went on smoothly, I was on a wheelchair and when I reached the Amsterdam immigration, I was just being questioned why I was on wheelchair and what happened to me.  And she continued to ask me the reason of going to Amsterdam, was it to seek treatment in their country.  Oh No, surely not!  How expensive it is to seek treatment over there, the currency rate will make me "bankrupt" in no time if I were to seek medication for a fractured leg.  Imagine how much it would cost to be hospitalized and doing surgery in an Europe country compared to the doctors in Malaysia.  If circumstances does not allow it, in case of emergencies, like for my case, if I fell during the time I was touring, then I would have no choice but to seek treatment overseas.

Talking about seeking treatment, I read that Malaysia has a list of efficient doctors specialized in plastic surgery, places like in Kuala Lumpur, Penang and Johor.  They cater for both locals and foreigners who opted to have treatments done in the respective clinics.  Most of the clinics has world class modern facility to accommodate each and every person's whims and fancies.  Read more about it in this website where there is a list of Doctors in Malaysia to cater to the needs of the patients. 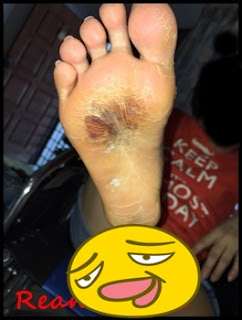 As for myself, the ankle is all healed up now, each day I am doing some leg exercises to strengthen the muscles.  Having rested my leg for several months, I have to learn how to walk normal again.  It has taken months to do that.  I used to walk with a limp because I want to avoid the pain on stepping fully on the ground.  Thanks to the encouragement from my love ones, I learn how to walk with courage again.  Despite the pain each time I get up after sitting down, I pressed on to walk.  Let the veins adjust to my normal walk rather than avoiding to walk normal so as to avoid the pain.

Sorry that I have to show my gross leg.... I thought I would be needing some plastic surgery on the wrinkles and dead skin.... That was taken when my cast was finally removed after a couple of months.