Tips on Cooking Steak to Perfection

July 27, 2017
Cooking steak can be deceptively easy. Many would-be chefs think that all you need to do is to cut a strip of beef, season it, cook it on a grill or pan, and you have a steak. With beef’s tendency to toughen when overcooked, it is quite easy to end up with a piece of meat that’s tough as rubber.
If you want to become a culinary master, cooking a perfect steak should be one of your skills. Getting the steak right, juicy and tender is a lot easier with the following tips:

Start with Good Quality Meat
Getting a perfect steak is easier if you have good meat. It is recommended to get as high a quality as you can afford. Prime is best and choice is a close second. By getting good meat, external factors that can make cooking difficult are minimized.

Select a Cut that’s good for Steak
A well-marbled cut of meat will result in a tenderer and juicier steak.  While you can theoretically use any cut, some cuts do lend themselves better to steaks.

Season Right
Just adding salt and pepper allows the meat to retain much of its natural flavor. If you’re doing this, it’s recommended to season just before the meat is put on the pan. However, if you’re using a grill, skip the pepper since the flames will just burn the pepper away. You can add the pepper after cooking the steak.

If you salt your meat for too long, it can dry out the surface of the meat. In some cases, you actually want this to happen. The steak will brown faster the drier the surface is. Additionally, allowing the salt and spices to sit on the meat will let it work its way in deeper and really flavor the steak.
You may notice that the salt draws out the juices of the meat, forming briny beads on the surface. You can wait for it to be reabsorbed or just wipe it away (and possibly lose some flavor) with a paper towel before cooking.

Cook Right
A good temperature for steaks is 575 to 600 degrees F (300-315 degrees C). If you don’t have a grill, you can use a heavy pan, griddle, or skillet. These can get really hot and replicate the effects of a grill.

If you’re using a pan, you can put the oil on the meat or on the pan – just make sure that the oil is evenly spread. If you’re using a grill, just oil the meat. Putting oil on a grill can make the grill sticky and become a fire hazard.

Don’t rely on the touch-test to check for doneness - invest on an instant-read meat thermometer. If the meat’s internal temperature is 120 degrees F, it’s rare. 140 degrees F is medium, and 160 degrees F is well-done.

Let it Rest
During cooking, the juices of the meat are driven towards the center of the steak. By letting the steak rest, the juices have time to redistribute and make your steak tender.

To rest the steak, put it on a plate and loosely cover it will foil. This will keep the steak warm without making it sweat out all the juices. A good rule is to let it rest for at least 5 minutes before serving. 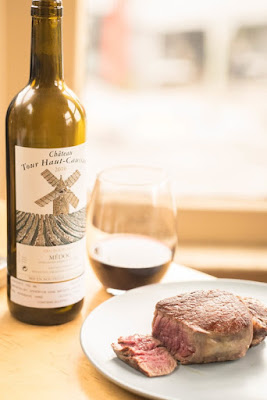