March 29, 2018
Philadelphia might not make as big a splash as New York City or Washington D.C., but it's definitely worth a road trip stop if you'll be traveling along the East Coast. From fascinating moments in history to odd attractions to world-famous foods, Philly has a little something for everyone. Discover what makes this urban center such an exciting and unique destination to add to your journey.
Historical Sites 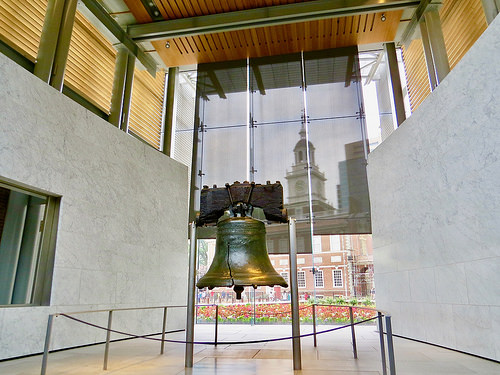 Image via Flickr by cjsorg
It's no secret that Philadelphia played a major role in American history. Independence Hall, where both the Declaration of Independence and the Constitution were signed, is considered the top Philly spot for history buffs. Conveniently located just across the street is the famed Liberty Bell, which weighs in at an astonishing 2,080 pounds and was once mounted in Independence Hall's belfry. Philly's City Hall, the largest municipal building in the country, is an architectural gem boasting plenty of historical significance.
Cultural Attractions
Philly's rich cultural scene would take weeks to fully explore, but a few key places are worth putting on your itinerary when stopping through. Be sure to check out the Philadelphia Museum of Art, which features an impressive collection of Impressionist paintings (along with the famous steps from “Rocky”). The Franklin Institute Science Museum is packed with educational interactive displays, while the National Museum of American Jewish History features more than 30,000 fascinating artifacts. Another interesting cultural attraction in Philadelphia is the Masonic Temple, which features seven meeting rooms each designed in a different form of architecture (Renaissance, Gothic, Egyptian, etc.).
Tasty Eats
First and foremost, your stop in the City of Brotherly Love must include a Philly cheesesteak. Geno's Steaks or Pat's King of Steaks, long-time rivals located across the street from one another, are considered the best places for authentic cheesesteaks. Another culinary spot to try is Reading Terminal Market, which is home to more than 100 vendors serving up delectable dishes from around the world.
One particularly unique dining option in Philadelphia is City Tavern. This restaurant promises a historically accurate dining experience, complete with Colonial cuisine and costumed servers. For more inspired eats, check out this Philadelphia city guide for some excellent dining options you can incorporate into a day of sightseeing around town.
Off-the-Beaten-Path Activities
If you're looking for unique things to do in Philly, put the Mütter Museum at the top of your list. This museum, which is dedicated to medical oddities like preserved body parts, is not for the faint of heart but is undeniably fascinating. Disturbing thrills can also be found at the now-empty Eastern State Penitentiary, where many a prisoner went insane from forced solitary confinement, and the Edgar Allan Poe National Historic Site, where you can tour the writer's murky basement.
Fortunately, not all of Philadelphia's unique attractions are quite so creepy. Philadelphia's Magic Gardens is a whimsical folk-art gallery space, while the Shofuso Japanese House and Garden is one of the most stunning traditional Japanese gardens in North America.
Experience what makes Philadelphia such a fascinating and distinctive city by making a stop here on your next road trip.